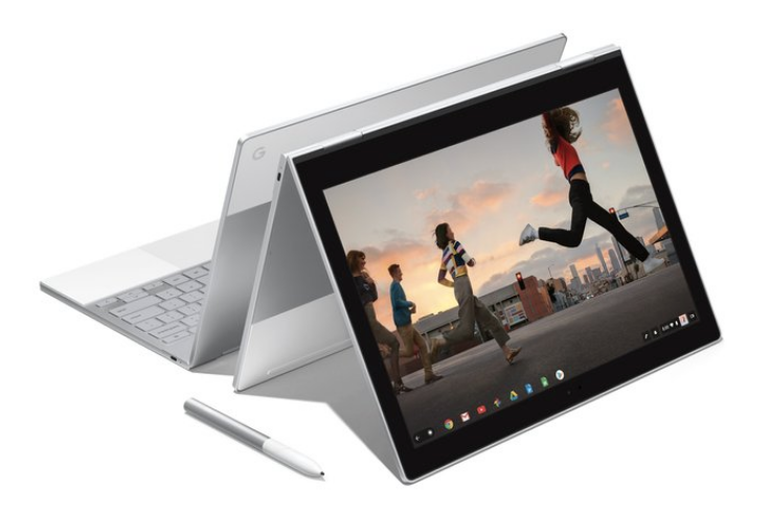 The new Pixelbook is in stores, and Netpremacy has been lucky enough to have already tried and tested the new product. With several members of staff already upgraded to the Pixelbook, we want to give you a full breakdown of the new features that it has to offer.

The Pixelbook is Google’s thinnest laptop ever, at only 10.3mm thick (closer to a tablet’s thickness than a laptop). Its sleek, high-end design including an aluminum body and stunning glass detail, as well as the 360-degree screen allowing for both fashionable and flexible working. This new Chromebook includes a tablet-like touchscreen (2,400 x 1,600 pixel) with stylus compatibility and an impressive 7th-generation Intel Core processor (either i5 or i7).

One of the first things you notice about the new Pixelbook is how incredibly light it is (1.1kg to be exact). If the compact design wasn’t enough to make it stand out, the use of Google’s fast Chrome OS operating system, now with Android application compatibility, really gives it a unique selling point against all other devices.

Another benefit of Google’s Pixelbook is how quickly it charges – from just 15 minutes of charging you can get roughly 2 hours of power, making it the perfect device for people on the go! When the Pixelbook is fully charged, it can last up to 10 hours without a break (that is longer than the average working day). The great thing about the long-lasting charge on this new device is that it really gives you complete mobility, without having to worry about where the nearest power bank is!

One aspect that may take a tiny bit of adjustment is that the Pixelbook only has three ports: two USB-C and one headphone jack. This is Google getting ahead of the game with the USB-C being more and more popular for phones and laptops. With increasing tendency for agile and remote working, more companies are turning to video conferencing as a default means of communicating with teams members across the globe. The Pixelbook webcam has a 720p resolution and 60 frames-per-second capture rate, making for the ideal video experience.

The Pixelbook is the first Chromebook to have Google Assistant built in, and with the ever-growing popularity of Google Home (and Google Home Mini), this is a great asset to the laptop.

When using this part-laptop, part-tablet device, it’s clear that design and performance were not only taken into consideration but were the main focus for the development. The super responsive trackpad and clarity of the screen allow for usability and fluidity, and the speed is exactly as you would expect, lightning fast. No amount of tabs you have open when using the Pixelbook will slow it down – it seems that nothing can get in the way of the Pixelbook’s potential.

The price is more expensive than the average Chromebook, however, I think we can all agree that this is completely justified thanks to its top-of-the-range design and seamless performance. So, if you’re looking for a device of this caliber, the Pixelbook is definitely the right choice for you.

Want to upgrade to a Pixelbook? Take a look at our Pixelbook page, or contact us for more information.